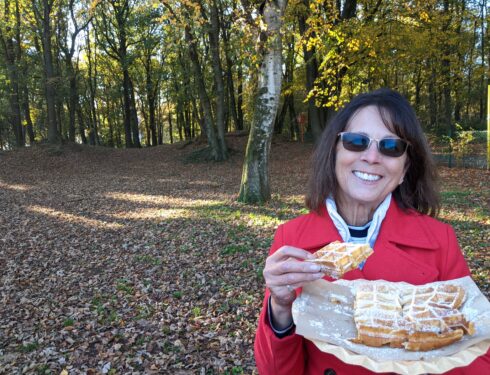 I really want you to get to know me, Debbie.

So what you need to know first and foremost is that I love to travel.

Growing up we never took a family vacation. We never went anywhere actually. I grew up in Los Angeles California and a “vacation” for us was to load up the station wagon and make the drive down to Salton Sea to visit my grandparents little getaway they had down there for the weekend. And this wasn’t very often. I remember how excited I would be knowing we were going “somewhere”! I was thrilled to stay in my grandparents great little 1950’s silver camp trailer and help my grandmother sell hot dogs and snow cones from her little portable food stand while my grandfather fished all day for corvina from the pier. I can remember at night sitting outside and looking up at the stars and pointing out the Milky Way and both “Dipper’s”.

When we had the opportunity to move to Nevada in the early 1970’s, I had my mother packed and renting a U-Haul “To go where no Smith had gone before”. Out of the State of California! Now this was only to the neighboring State of Nevada in a little town called, Tonopah, but at the age of 14, I thought, what a great adventure!

When I was raising my family I made sure we took family vacations nearly every summer. I would get ideas of places to visit from magazines, television or even just talking with co-workers and friends. But most importantly from my children. One year my daughter had learned in school that there was a place where she could stand in one spot and be in four States at the same time. So I planned a whole vacation around her curiosity. I would always figure out how to see and do as much as possible in a two week period.

During those 23 years we were able to explore so many beautiful places. Oregon, Idaho, Montana, South Dakota, Utah, Arizona, New Mexico, Colorado and even back to California. And then finally…..the airplane ride! My first airplane ride at the age of 37 to Nashville Tennessee to see Christmas in the Park at Gaylord. I remember getting there, parking the car, and as I walked towards the entrance I just started to cry. I was so overwhelmed with the thought that I was actually experiencing such a beautiful place. I get that way. I can’t tell you how many times I have had to fight the tears when I get somewhere.

And now here I am, 61 years old and I have had the opportunity to visit just about every State and about 27 countries.

Why we sold everything and moved to Europe!